Hey, I Think You Dropped This?!

Now, I was going to start writing about this the MOMENT it hit the news, but the post would have been entirely different and mainly saying the words “Go fuck yourself” over and over again. So I thought I would breath, take a few days to post other things and try and find a sensible place in my head.
Well the sensible place wasn’t found, instead I give you this. 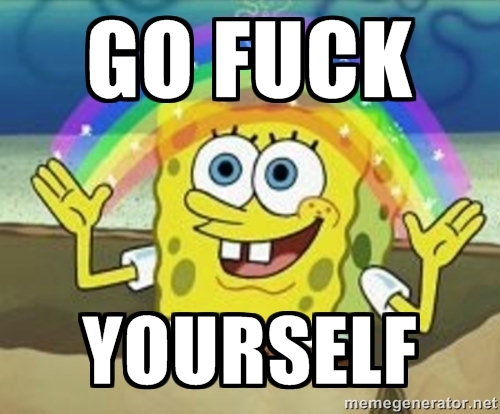 Yet again us queers and trans people have been told that we shouldn’t be in the LGBT acronym, and that a petition was started to drop the T from it.
Now sensibly, in my head, I would love nothing more than the trans community not to be labeled in the same category as minority sexuality, and that trans and queer would have it’s own section entirely. But, and here is the big but. The petition was started to drop the T because cis gays and lesbians were “uncomfortable” being around us, with one saying that

“We cause nothing but trouble and attack the gay community, and call out transphobia when they loose an argument”

Another person said that

Trans people do not go through the same social problems and prejudice, and that they will not know what its like to be gay

Now, I’m pretty sure that if you are signing a petition because Ms Greer is upset about the way she’s being treated, you are clearly not in favour of the trans community, and shouldn’t be fit to vote or sign petitions on issues that involve trans people.

There is also one tiny thing that a lot of the cis gay and lesbian community have seemed to have forgotten.
TRANS GAY, LESBIAN AND BISEXUAL PEOPLE FUCKING EXIST. In a single act, not only are they trying to erase trans people, they are erasing gays and lesbians. I would say that they are erasing bisexuals, but that was already happening without trans identities. Seems like anyone can be in the LGB community except they have to be monosexual and cis.
Also, since same-sex marriage has come into law, its seemed like all the battles are done, and now that the bisexual and trans community are not needed. Our job is apparently done, and the gays now need to cut away from the queer dead weight they don’t want to associate with the trouble makers.

Just one final thought to all the cis gays and lesbians who think that poor treatment of transgender people is acceptable.

Remember the stonewall riots?
Yeah, it was the trans and queer women who did most of the fighting.
I’m pretty sure if you keep poking at a lion, it will eventually bite. And us queers are getting pretty angry, and bricks are cheep 😉