Originally this segment was going to be based on answering as many questions as possible, but life took an unusual direction and we are going to do this post instead.
Occasionally I get messaged from men asking for dating advice and how to talk to a partner/s about what they want sexually. Firstly I would like to thank everyone who actually comes up to ask me. I know as a man (well close to a man anyway in my non binary identity) it feels embarrassing to ask for advice and I’m glad you come and talk to me. There is always a social stigma to asking for advice, and we are taught that its not manly to ask for help.
This post however was brought on by some problematic wording sent to me. An individual was highly distressed and was talking about trying to date someone but had said that “bisexual women are whores”. Now what had actually been said had been brought on by a mans personal experience where they had felt abused, but the words had been stuck in my head that even to this day there is an stereotype that bisexual women are slutty and are whores.
Now I’m going to say this now, if you treat women like they are whores (unless its consenting of course) then you deserve everything you fucking get. I’m also going to say this. Using slurs because a woman is in charge of her sexuality is a fucking dick move. And also even if she was a sex worker, what difference does it make to you if you are not dating her.
Slurs are often thrown round with men when they don’t get what they want. Don’t say we don’t do this. We have ALL been guilty of using slurs against people at one time or another because as men we struggle to project our feelings sensibly often hurting people in the process. Our egos are that fragile at times, that we do say stupid shit. We need to as men look at what the fuck we are doing, and stop problematic behaviour. 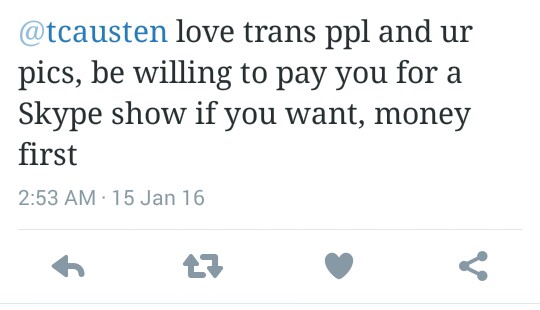 As well as our wording towards people we consider ourselves to be attracted to, we must always challenge our own behaviour online. The screen caption above is something that got posted to me on Twitter. This was not a private message, it was public.
I’ve posted several screen caps that I have received in the previous months, but this was actually the most concerning. You see my Twitter is public. I am open that I’m a trans activist and I post a lot of my instagram photos on there as well as my blog posts. Never have I offered my services on Twitter nor have I mentioned that I would be open to such thing. For starters my mother is on twitter and if I want to fuck someone there is always fetlife for that.
The person who messaged me (twice in fact) had gone through the transgender hashtag and assumed that I would be a sex worker BECAUSE I’M TRANS.
I am not a sex worker nor have I advertised friends and partners who are on my twitter. I choose not to be a sex worker because I do not have the physical capabilities on myself to do it. It was assumed that I must be because I am transitioning.
Guys, please PLEASE, do not assume that everyone who is trans is in fact a sex worker. Its fucking embarrassing to everyone.

We often struggle with our own sexuality as men and to show anything other than “alpha male butch macho” automatically makes us gay in societies eyes as well as our own peers. We are taught that feelings, emotions, and anything like that is “feminine” and that’s a trait that we cannot show.
I’m aiming this at the binary trans men. Do you know how bullshit it is? To see a lot of you guys act super macho and rip into feminine trans guys. Fucking stop it. We are taught in society that men cannot do certain things, and to behave in certain ways. We get treated as “butch lesbians” or “ugly women” often in the cis society, we don’t need any of that bullshit in our own fucking community. Being a man means being a man. Who gives a shit of they are camp as Christmas and take 8 dicks up their ass at the same time.
I’m not saying to stop acting super masculine and stop going to the gym 4 times a week. I’m asking to stop disrespecting other men based on your own ideals of masculinity.

So why is it that this is in the dating section. Well because these sorts of behaviours affect the people you care about. Women don’t want to be treated like they are shit because they rejected you, men don’t want to be belittled because they are camp, and non binary people just want some fucking respect.
I was chatting to a guy earlier and I had to block them, and it normally takes a lot for me to block someone.
He asked me how big was the largest cock I had, and I was honest. I’ve had a guy that’s 10 inch’s before. It was hot, but painful and it all couldn’t get in me without excruciating pain. I’ve also had a guy who was so big they couldn’t keep it up for Long periods of time because, well there is only so much blood in the body.
The guy said I was bullshitting, that big cocks didn’t exist and that I was just making it up. I explained that there are men with huge cocks and that I was sorry that he had never experienced the joys of a larger man. He then decided to call me a pathetic little child, who only sees dick in porn and that any dick would be big, because I was a big girl and I was just tight from not being used.
This is toxic masculinity. A point was proved and rather than sensibly talking about it, he decided to call me a woman, even though he knew I was a trans man, and hadn’t done this before. It was only when his masculine identity was “at threat” did he treat me like shit. I gave him a chance to apologise and he didn’t, instead he decided to say how he was in the right because I don’t have a cock.
We should be teaching ourselves that this sort of behavior is both not needed and is pretty threatening. We need to be teach on ourselves that one persons sexual abilities and conquests are not something to be mocked or abused with slurs. We need to train ourselves as men that feminine men should not be treated any differently then masculine men, and finally we need to remember that our actions affect people.

I would like to say sorry that this is the longest segment of “queer dating” I have done. This post also has not been aimed at anyone to hurt them or to call them out. I am just trying to explain that we need to as men start looking at ourselves and behaviours and see how we can improve in ourselves.

Thank you for reading.